Raymond Hazard Ayler served in the 92nd Division, Battery B and also the 349th Battery B. Prior to serving in the Military worked as a Farmer in Portsmouth. He registered for the Military on 6/5/1917. He is listed as sailing to Europe on 9/23/1918 as a 2nd Lieutenant.

An article in the Fall River Evening News, dated May 14, 1919, writes about Mr. Ayler returning from Brest, France as a Second Lieutenant to assist his father on their farm. 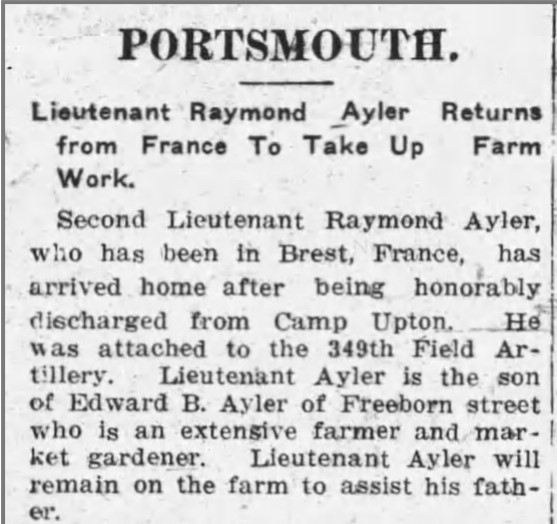 Lt. Raymond Ayler Serves in a Black Unit during WWI

“Negroes Selected for Service Entertained by Club” read a Newport Mercury headline on November 2, 1917. The article calls them “selected for service” but we might use the term “drafted.” As the United States entered World War I, the standing army didn’t have enough soldiers to mount the effort. The Selective Service Act was passed by Congress in May of 1917 to supply the necessary troops. While some Southern politicians were opposed to drafting African Americans, the War Department decided to draft them anyway into segregated units. Among those “selected for service” was Raymond Hazard Ayler of Portsmouth. He was one of the eighteen men celebrated by the Aquidneck Island black community. The men were told that the community would support them by taking care of those they would be leaving at home. According to the Newport Mercury article – “The purpose of the banquet was to show the esteem which the colored men of this city have for their boys, to encourage them and wish them godspeed and assure them that the entire city was behind them.”

Raymond Ayler’s draft registration card gives us some background on the soldier. He is listed as 24 years old, single and a farmer at Freeborn Street in Portsmouth. Raymond grew up on the farm of his father, Edward Ayler. His father and grandfather came to Portsmouth after the Civil War. Before 1870 Quaker Joseph Macomber brought 16 former slaves to Aquidneck Island. The 1870 census shows the Ayler family living on Macomber’s farm at the bottom of Quaker Hill. Gradually the Ayler family was able to purchase their own farmland and became prominent farmers winning awards for their produce.

The Ayler family was very active in the Friends Meeting House community, so Raymond’s military service was surprising. Raymond’s older brother Osceola was granted an exemption as a conscientious objector because of his Quaker faith. The draft registration cards of both Raymond and his brother have the corner’s cut. This was a way to quickly signify black registrants and make sure they were assigned to segregated units. In August of 1917 armed black soldiers fired on Houston police and civilians ( the Houston Riot) and the War Department assigned most black soldiers to labor jobs such as road building or freight handling. Only two black combat units were established – the 92nd Artillery Division and the 93rd Infantry Division.

Raymond Ayler was assigned to the 92nd division of the National Army. He went to Fort Dix in New Jersey for boot camp and then to Fort Upton in Long Island for further training. He became part of the 349th Field Artillery Regiment. The regiment was trained on 75 mm guns and it had a machine gun battalion. The division was transported to Brest, France in July of 1918 to be part of the American Expeditionary Force. Raymond and his unit were moved to St. Nazaire for further training and were affiliated with a French division. They worked with British and French armies in the Meuse Argonne offensive of the American First Army and the allies were able to stop a German offensive. By May of 1919 Lt. Raymond Ayler was discharged and returned home to his father’s farm in Portsmouth.

As late as 1927 he was active in the Portsmouth Post of the American Legion and he served on the executive committee alongside William H. Vanderbilt. By 1930 Raymond is listed as living in Westchester County, New York. Both Raymond and his brother Osceola lived out their lives as self-employed carpenters in New York State.