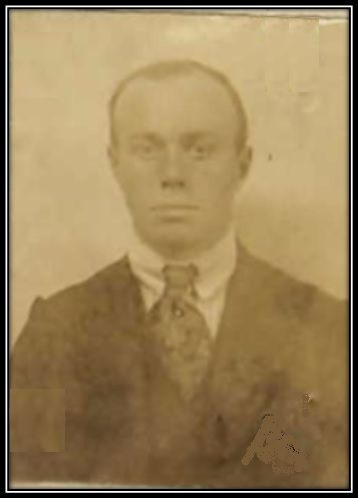 Henry Ellsworth Thomas enlisted in the Navy on August 6, 1917 and served in the US Navy during WWI. He was assigned to the USS East Hampton (SP-556), a United States Navy minesweeper, patrol vessel, and light vessel in commission from 1917 to 1919.  He was released from the Navy on July 29, 1921. He passed away in Feb 1972 and is buried in the Portsmouth Cemetery, Turnpike Avenue, Portsmouth, RI.
East Hampton was built as a commercial steam trawler of the same name by Cobb and Butler at Rockland, Maine, in 1913. On 18 April 1917, the U.S. Navy purchased her from the Trident Fisheries Company of Portland, Maine, for use as a section patrol vessel and minesweeper during World War I. She was commissioned as USS East Hampton (SP-573) on 8 May 1917 with Lieutenant John O’Brien, USNRF, in command.
Assigned to the 1st Naval District in northern New England, East Hampton served on patrol, minesweeping, towing, and icebreaking duties. Between June and August 1918, she temporarily left those duties to escort U.S. Navy submarine chasers on voyages to Bermuda and the Azores, after which she resumed her operations in the 1st Naval District for the rest of World War I.
In January 1919 East Hampton was fitted out as a light vessel, serving in that capacity at Middle Bank and Stillwagon Bank until May 1919.
East Hampton was decommissioned on 2 December 1919 and sold on 14 June 1920.