Member of Ancient and Sacred Order of the Golden Dragon 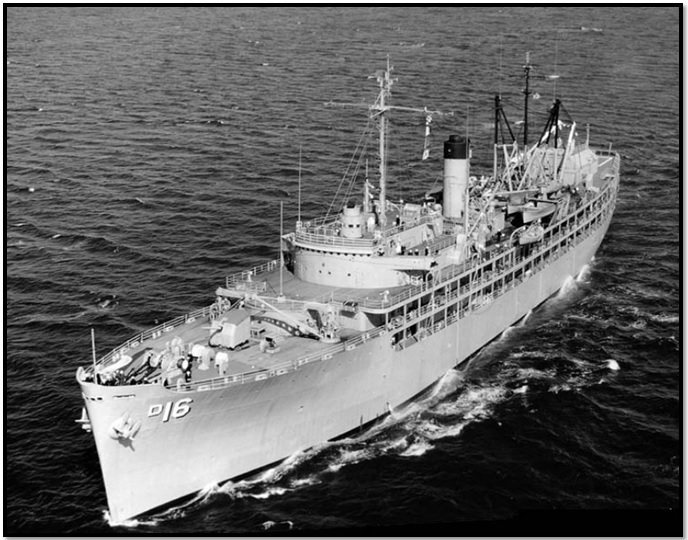 Duty Stations: COMDESDEVGRU Two,. USS Cascade (AD-16), the only ship of its class, was a destroyer tender in the United States Navy.
Originally designed as a passenger-freighter, the Cascade was launched on 6 June 1942 by Western Pipe and Steel Company in San Francisco, California. The ship was sponsored by Mrs. Charles W. Crosse, wife of Rear Admiral Charles W. Crosse, USN. It was turned over to the Matson Navigation Company of San Francisco, California, for outfitting in October 1942. The Cascade was commissioned on 12 March 1943, Captain S. B. Ogden in command.
Mediterranean, 1951–1974
Recommissioned on 5 April 1951, Cascade was based in Newport, Rhode Island, as tender for the many destroyers home-ported there. From Newport she cruised to the Caribbean and the Mediterranean to support the destroyers deployed there. During this time Cascade served as flagship, and carried the flag of Commander, Service Force, 6th Fleet, and the flag of Commander, Destroyer Flotilla 6. She also served as flagship for Commander, Destroyer Force, Atlantic. She served in this role as flagship and tender up through 1963. From 1970 to 1974, the Cascade was forward deployed to the Mediterranean, homeported in Naples Italy. When was in the port of Naples Cascade was used even like a set for a scene of Italian Movie Polvere di stelle in 1973 with Alberto Sordi, Monica Vitti and John Phillip Law.